We talk to Nick van de Wall, AKA Afrojack, whose Kapuchon project sees the Dutch powerhouse return to his House and Techno roots

Our first SoundOf mix for 2021 with a very special session with Kapuchon.

The latest project from Nick van de Wall, AKA Afrojack, Kapuchon sees the Dutch powerhouse return to his House and Techno roots. Originally released under the Kapuchon name in 2009, the global lockdown has allowed van de Wall to refocus on the project after a decade touring the world and conquering the charts as Afrojack.

The first Kapuchon release "10 Years Later" dropped at the tail end of 2020 and was the first in a promised schedule of a new release every six weeks.

We caught up with van de Wall in his studio over Zoom a couple of days before Christmas last year. We discussed the new project, his hopes for 2021 and thoughts on the scene at large.

Nick recorded an exclusive Kapuchon mix to accompany the interview which you can listen to below, or watch on our Instagram and Facebook pages.

MoS: Hey Nick! Good to speak to you! First of all, congratulations on your wedding back in September, how was it getting married during a pandemic?

K: Thank you! It was great. We were thinking, we might have some issues, but we didn’t have any issues. It was in September, right before they made the rules tighter again. We had something like 140 people and of course, none of them had been to a party for a long time, so it was a real fucking party!

M: So we’re here to talk about your Kapuchon project, where does the name come from?

K: It’s the Dutch word for hoodie because I’m always wearing hoodies, I’m wearing one right now. I’ve always been wearing them since before Afrojack even. I think they look kind of gangster and they’re very comfortable, but they don’t look too informal. They look like you just finished at the gym or something, but you can also go to a meeting in one. If I wear a regular sweater, without a hoodie, that’s super formal for me.

M: Kapuchon is your 'new' project, but it's actually been around for over a decade, tell us about the beginning of the project.

K: When I first started DJing in 2007 / 2008 like 95% of what I was playing was House. The stuff I was producing was eclectic, I was making a crossover between house and EDM, which didn’t really exist back then and then also hip hop influenced house. In 2009 I had some success as Afrojack, but I still wanted people to know I also loved doing house and techno as well, so I released some stuff as Kapuchon. I released a record with Benny Rodriguez on Dave Clarke’s label, White Noise. Something on Steve Bug’s label and something on Josh Wink’s Ovum as well, I think.

M: What inspired you to revisit Kapuchon?

K: In 2018 / 2019 I started to notice that House music was coming back. I saw all these DJs creating House aliases and doing House in a sort of EDM way. I thought, ‘well I’ve been doing House for a long time’. I was still playing shows in Val Thorens every winter on the slopes just playing House and Techno, so I had this record I made that was ready to go. I debuted it on 12th January 2019, so literally ten years after the original Kapuchon releases. I called it ‘10 Years Later’ and started playing it and it worked and people liked it. I started making some more House tracks and would play them in the middle of my Afrojack sets. Now with Corona, I’ve had the time to actually focus on it and record a set of Kapuchon. Suddenly there was no more hassle from labels or promoters asking about Afrojack, so we had time to really think about how we wanted to do Kapuchon – so from January, we have a record every six weeks. It’ll be a lot of fun.

M: The timing was right.

K: There’s always a time for everything. I notice this with songs, sometimes I make a song and it just doesn’t fit with what people are listening to at that point in time. So we sit on it and in a couple of years the time is right and we release it. It’s always about timing.

M: You were meant to debut Kapuchon live at Tomorrowland winter 2020, had that been in the calendar for a long time?

K: Not really, the thing about Kapuchon is it’s about going back to the roots. When I have to prepare an Afrojack set for Tomorrowland or Ultra, or whatever, I need about two or three months of preparation. We have to make sure we fucking murder it because my team and I have a reputation to uphold. In a set like that, there are so many people to keep in mind, you have to keep the old fans happy, the newer fans, the haters, the labels, there are so many people to try and satisfy. With Kapuchon, it doesn’t matter, it’s just me and my team and we just want to have fun. So preparing a Kapuchon set is just 5, 10 minutes of selecting my favourite records.

M: Is that more industry-focused side, keeping stakeholders happy etc, something you'd like to move away from after Coronavirus?

This is something I touchback on, if you compare it with food, just because you like chicken, it doesn’t mean you have to be chicken. One day I’ll have chicken, the next day I’ll have pancakes, the chicken guy isn’t going to get annoyed because I had pancakes! It’s the same thing with mainstage EDM and the smaller House thing – one day you want a McDonald’s cheeseburger and the other you might want to do some fine dining. To me, House and Techno are so particular and all about the detail, to me that’s fine dining. When you make a pop song you create something which isn’t too specific, something that out of 7 billion people, 1 billion like it. House and Techno are for connoisseurs.

M: That's a great way of looking at it. I suppose the only problem is when you make something for the connoisseurs, they can often be overly critical, how do you handle that element?

K: You just have to remember that the connoisseur sometimes also eats pancakes. They might not say it, but you know they do and they know they do. When you’re in the car driving and AHA – ‘Take On Me’ comes on, you’re not singing along? That’s a jam and we don’t have to be ashamed of it. 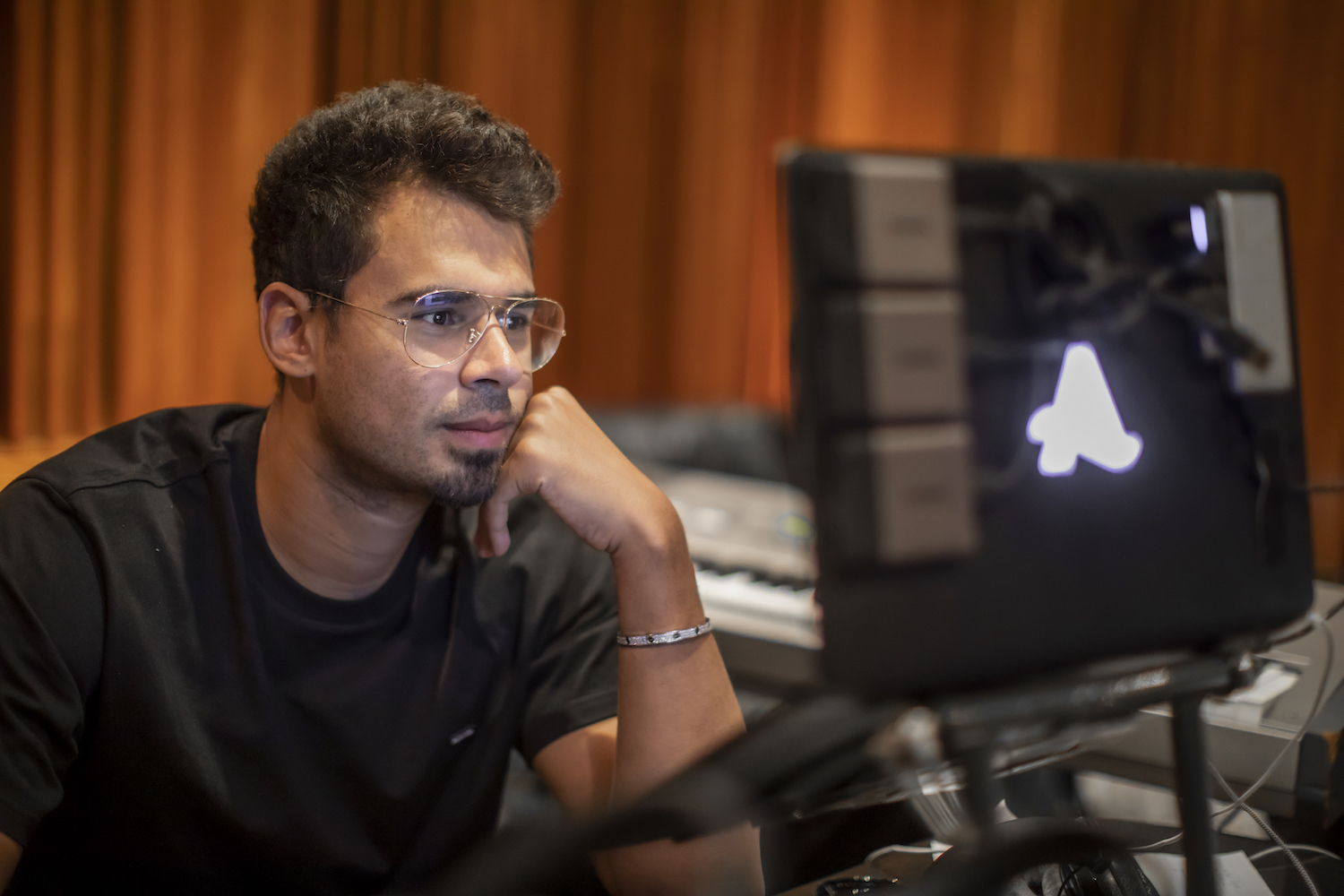 M: Do you have an idea of where and when the first Kapuchon set is going to be after lockdown?

K: I’ve never been booked yet! The first guy that DM’s me about a Kapuchon set, that’s where I’ll play! I don’t have an agent, let’s go! I don’t want this to be a literally commercial thing, as in something designed to make money. I want it to be fun and transparent. Any club that asks, I’ll consider it.

M: What can fans expect when they finally get to see Kapuchon live?

K: There’s a place called Val Thorens in the French Alps. I’ve done it for the last 10 years. We do parties two or three times a week – one or two on the slopes and one in the only club in the village. We put everyone on the stage and play as long as we want. One show last year I played from 10 PM to 5 AM back to back with all my friends. Those are the most fun nights, where you can give people a personal experience and enjoy the music with them.

M: Do you think we'll see more of an emphasis on intimate parties once the scene gets going again?

K: This is a very interesting notion. I’ve said this before, right now it’s very sad, I think the dance industry has shrunk 95% due to corona. This means a lot of companies are going bankrupt, which sucks, it also means that the companies that are left probably won’t have too much money. This means there will be a bit of split as the smaller companies try and rebuild, which should hopefully force most of us DJs to leave the private jets for a second, fly commercial so we can help these smaller clubs. For me that’s really exciting because it means that the passion will be reinstated, there’s going to be a whole new group of passionate people trying throw parties and make shit happen. As I said, I respect the economy, it takes care of me, it takes care of my team, but I’m really excited about those new underdogs that’ll be throwing the new parties. I can’t wait to re-experience what I experienced in the first few years of my career.

M: You've recorded an exclusive mix to go with this feature, what can we expect to hear in the set?

K: It’s basically all Kapuchon music, there might be some snippets of other artists in there, but it’s really about showing the freestyle nation of the Kapuchon project. The tracks will be being released every six weeks and we’ll keep going as long as feels right. It might be an EP of four tracks or even just a 60-second loop, but every six weeks there’ll be something.

M: Are there any other genres you haven’t worked in that you’d be interested in exploring with future projects?

K: Drum & Bass! I mean Noisia type Drum & Bass, so very complicated production. I think before I start producing it, I’m going to start trying to implement it into my sets. Right now I do EDM, I’ve worked out a way to bring House into my sets, I’ve done Trap and I did one song called ‘Flawless Victory’ which is almost Hardstyle, so I think adding in Drum & Bass should be fairly organic. But it needs to be the right thing, which will be tricky as it’s a very high tempo and there’s not much in there to make my Grandma understand it – and that’s always my goal!

M: Do you reckon you’ll do some Kapuchon remixes of Afrojack sets?

K: Maybe, I haven’t really thought about it. I did one sort of Kapuchon remix, but it ended up just becoming a straight Kapuchon track.

K: Thank more people that have been helping me.

Thanks Nick, and Happy New Year!