Due to the global pandemic and national lockdown restrictions, we've had to put our long-running Making Friends With series on ice for 2020. After all, how can we get to know new artists in their favourite hangouts when everything is closed?

That was until we were introduced to Soda State, who are uniquely placed to facilitate a virtual Making Friends With. The two friends and producers were innocently making electronic music in their North London studio when they were sucked into another dimension - the eponymous 'Soda State'. After living their best lives in Soda State the boys were returned to Earth, but not in the physical bodies they inhabited before, but rather as digital avatars of their former selves.

With coronavirus transmission not extending to digital avatars, it was safe for me to attend a very special one-off gig with the guys back in October, wherein I was the only organic being in the room. The performance was a truly unforgettable experience, which you can listen to in the mix below.

After the final tune, I got to know the guys a little better over some clinking beer emojis 🍻

MoS: Who are Soda State - What are your names? Are you human?

T: Are we human? That’s a good question. We were. Just two regular guys, before it all changed.

How did you come to be in your present Avatar form? I understand you had an extraordinary experience with regards to when you were working together making music? What exactly happened?

T: We’ve been making music together for a few years in M’s garage in London. We've got a home studio setup there - some analogue synths running into our laptops and a whole load of home-made gadgets.

M: Tracie’s really into that, classic-sounding synths from years ago, but also finding new ways to use this stuff and wire it up

T: So we were just vibing one day. We were playing around with the idea of re-working Metronomy’s "The Look". M was on the DX7, I was running it through a sequencer I’d made out of my dad's old Atari and that’s when it happened.

M: Yeah it was mad. Like there was this massive flash and then we felt ourselves literally catapulted forwards and transported into some kind of portal. Like some Matrix or Tron shit. Mad lights and insane colours. And then there we were in Soda State.

T: Obviously at first it was pretty terrifying, but once I was confident I wasn't about to die and relaxed a bit, that’s when we felt it. That rush, like a big serotonin hit. Looking round, everything we saw was familiar; nostalgic even but colours dialled up. It was mad - pure escapism, hedonism even; like there you can be who or whatever you want to be.

M: And we managed to stay there for a week before we found ourselves tumbling back through the portal and back into the studio.

T: Looking how we do now! It’s how we first looked when we got to Soda State – like the avatar versions of ourselves –  but this transformation seems permanent for now.

M: And that’s what we've been getting used to being: Digital beings in a human world.

M: Pretty normal I guess. We met on a sound engineering course a few years back but both dropped out around the same time to actually start making music rather than just learn about making music! And we’ve been in the studio doing that ever since. 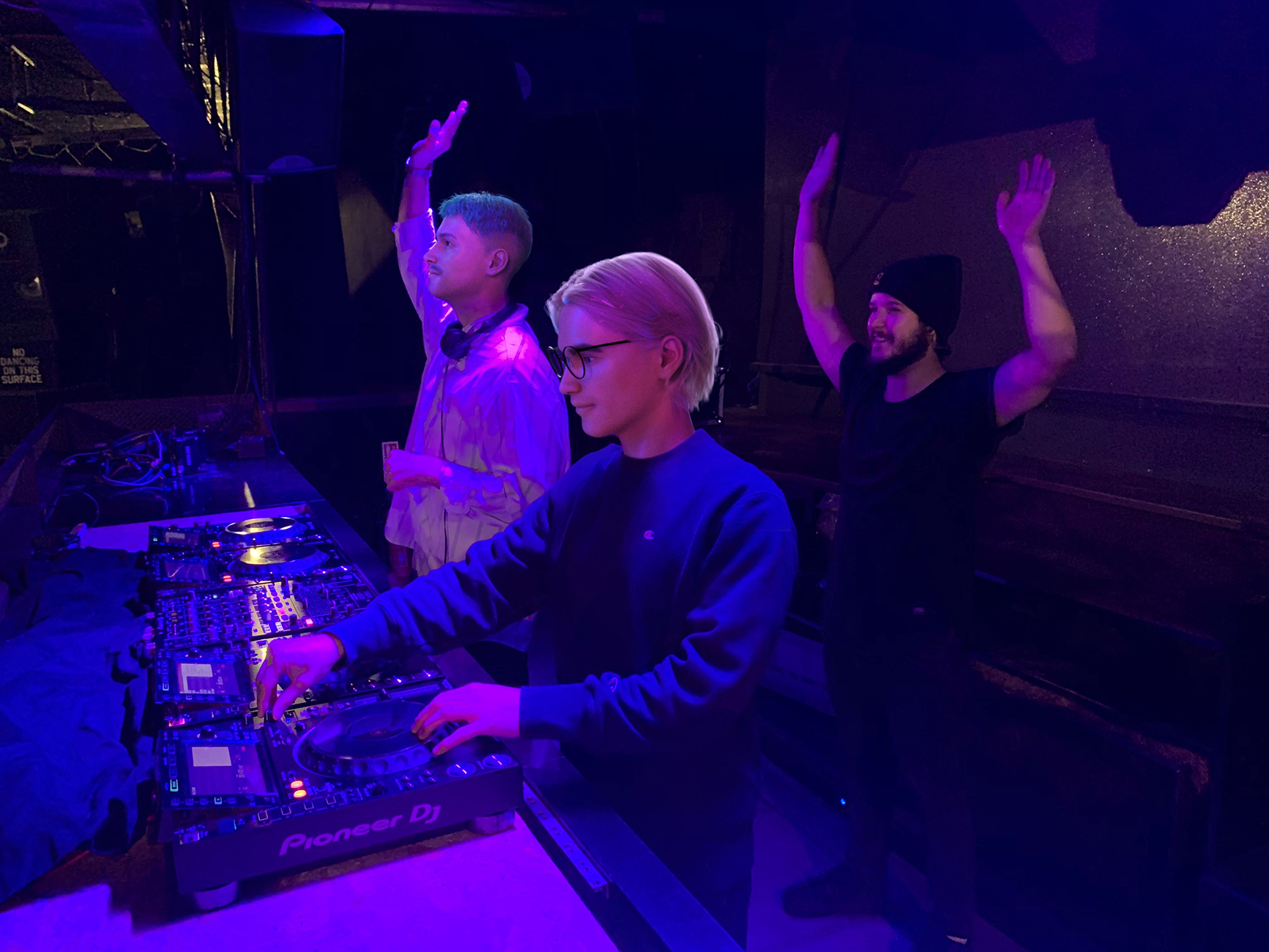 What are you guys into outside of music – where can we see you hanging out?

M: We don’t live far from each other in North London and we spend a lot of time in the skate-park in between our houses.

T: Yeah we play a lot of video games too - currently on about our fifth time through Ocarina of time from the beginning again, dusted off the old N64.

What have been your releases to date? tell me about them and what was the idea behind them?

M: So the first release was a cover of Metronomy’s 2011 hit "The Look". That was the first tune we made that got us to Soda State so we decided to put it out and call the project Soda State.

T: We’d made loads of tunes before that but that was the first one where we must have hit the right combination of digital 1’s and 0’s that opened up the portal. That’s what we think happened anyway.

M: and then it happened again when we made the Club Soda version of "The Look". That was always something we knew we wanted to do as well, releasing club-focussed DJ friendly mixes alongside our singles. Hopefully one day soon earth will reopen its clubs and we can play them out.

T: So yeah we put that out too - in the hope it may give the listener some small moment of escapism too – maybe give them a glimpse into the Soda State of Mind – which is what we call it!

M: Then we had an old demo of a tune called "Midnight", which we were messing around with one night and on about the 3rd or 4th version, something clicked and we got transported back once more.

Will anyone be able to join you when you return to the Soda State?

M: So far no. Or at least it's never happened when we've had people in the studio with us so far, but who knows?!

What elements does a Soda State track have to have to make it a signature release?

T: Musically I've always been influenced a lot by stuff like Daft Punk, and generally French House. I got into DJing when my friends showed me people like Digitalism, DJ Mehdi, Cassius, Boys Noize etc. And the nostalgia of people like M83 and Duke Dumont's "Ocean Drive". I think that probably comes across in the music, it's always gonna be synthy and nostalgic.

M: And the whole Soda State experience means that lyrically we’re definitely writing about escapism all the time; about taking yourself away from the world around you and giving yourself over to the moment.

Tell me about the look and feel of your videos, what sense are you portraying, what is the feeling you are evoking?

T: So we make those collage type videos ourselves. Partly driven by Covid and the difficulty to shoot original footage! -  but also, it’s an overriding sense of familiarity that we want to portray in the videos

M: There’s something warm and escapist in nostalgia, so whether it’s the kids in "The Look" video play-fighting but imagining they’re Luke Skywalker fighting Darth Vader or the pool parties and kids jumping off ramps on their bikes in "The Midnight" video, it's just meant to be relatable and fun.

Is escapism particularly important in our present time?

M: Yeah, 2020 has been a mad year hasn’t it! And maybe it’s our transformative experience over the last half of the year, combined with the pandemic and the endless environmental disasters, but I'm definitely up for escaping the world for a bit.

T: Yeah definitely makes me appreciate our trips to Soda State more than ever! Politics doesn’t even exist there. As we said before, we hope our music and our videos can provide a moment of escapism for our listeners because I think everyone’s desperate for a bit of that right now.

Now that all gigs are virtual gigs, it must be a pretty good time to be an avatar artist, have you been thriving during lockdown?

M: …kind of. I guess the one thing Covid allowed T and me to do was to literally lockdown in the studio. In our own bubble.

T: Yeah and we're right at the start of our journey, so its giving us time to get used to life now. A big goal for us is to start building the live setup so we can get playing shows.

M: We defo look forward to being able to play all our music live one of these days.

What releases and plans have you got forthcoming you can tell us about?

M: Well our mantra is as soon as we crack the code again and make a tune that gets us to Soda State, we’ll put it out! So watch this space...