Ahead of Sigaland, we caught up with the serial hitmaker for an in-depth chat

The chart-conquering Sigala is making his triumphant return to Ministry of Sound.

Sigala debuted to the world back in 2015 with the super-smash hit, "Easy Love". The Jackson 5 sampling track was released on Ministry of Sound Records and reached No.1 in the UK and cracked the Top 10 in many countries around Europe.

Since then he's released a steady stream of hits including "Sweet Lovin", 2016's team up with DJ Fresh - "Say You Do" and 2017's collab with Ella Eyre "Came Here For Love". Last year he released his first full-length studio album, Brighter Days, which included an amazing six top ten singles.

On Saturday 2nd February, he'll debut his new Sigalaland event. Along with performing a headline set, he'll invite some of his favourite artists to support him on the night.

Ahead of Sigaland, we caught up with the serial hitmaker for an in-depth chat.

Hello Sigala, and Happy New Year! You’ve just come out of yet another insane 12 months of music. How’re you feeling?

Last year was amazing man, it was probably the best so far! I’ve seen so many amazing things and went to so many awesome places on tour. Towards the end of the year, I started to just focus on making sure I have enough music coming into this year, so for the for the past couple months I’ve just been in the studio getting my next tracks ready to go so that I have everything set up before I start touring again!

New Year's Eve seemed like a good end to the ‘Brighter Days’ year you’ve had, with "Lullaby" getting a play during the London NYE fireworks. Is seeing that a surreal experience for you as an artist?

That was amazing! Always such an amazing thing to be a part of, and obviously so many people see it and the reaction is always incredible. It makes me think I’ll need a few more pyro shots in my show to compete with that!

Your album, which is the culmination of 3 years’ worth of insanely successful singles, debuted in 2018 to great success. How satisfying is it to be able to tie a ribbon around the Brighter Days project?

It was a really nice way to round off the last couple years - just because I’ve always wanted to do an album - I was just waiting for the right time really! I had lots of music that I really wanted to get out and I just wanted to kind of create a package that fans can buy that’s everything I’ve done so far and a bunch of new stuff as well. There’s a little bit more to listen to than just a couple of singles a year, you know? Also a bit more of what I’m about as well, there’s a few different genres and some really interesting features, it’s a chance to experiment more and do some slightly more out of the box stuff than I’d done previously.

Any clues on what direction you’re music is taking?

I’m not sure really! I feel like my music taste is always changing and obviously I’m inspired by trends and things that are going on at the moment, but at the same time I always have a love for old-school funky music like Chic and stuff like that which is something that I always go back to - and 90s house music has always been a big part of my inspiration - but I think it’s just taking what I’ve done so far and bringing a bit more of a maturity to the sound I guess.  My sounds are always going to change because my music taste is going to change, it gets boring just making the same song, so I’m always going to find something fresh.

There’s always a lot of energy in the music you produce, is the high energy aspect something that’s important to you?

I think so, it’s a big part of what I do! I’m not excited by music that doesn’t have the energy, and I need to be excited by something that I’m making! I think my music is always going to have energy, and house music is where my heart always lies and the sound I feel comfortable making. I’ve been experimenting with other styles, slower tempos and drum & bass, things like that, but house music is always my home.

Sigalaland is a totally new event from you. What’s it all about?

Sigalaland is something that I’ve wanted to do for a long time and this Ministry show is only really the start for me. There couldn’t be a better place to do it, to be honest, I love the venue and it’s been a big part of my history - I’m even signed to the Ministry of Sound record label - and it all ties in really nicely. It’s a great place for the first event of this kind. For me, it’s all about bringing together artists and DJs that I love and respect and bringing those people together and putting on an amazing night. I'm just having fun with it and provide high energy and good vibes!

You spent a lot of time in London when you started out, does Ministry of Sound hold significance for you?

As I’m sure most people have done, I spent my formative years in clubs, Ministry of Sound being one of them. I’ve partied a lot there and had many a great night on its dancefloor. I never thought I’d be in the position to be headlining a show there, so it’s really quite a special occasion!

You’ve chosen one hell of a line-up for the first Sigalaland. What’s excited you about Blonde and Dynoro?

Blonde and I go back a few years now, I’ve been good friends with them for a long time and worked together on a lot of stuff, and we’re also on the same gig circuit so we see a lot of each other on tour. They’re very close friends of mine, I’ve got a lot of love and respect for what they do and their music - they’re like the seasoned pros of the night. Then there’s the other side of fresh and exciting talent from Dynoro, which I think is good to have there, so people can see something new and exciting. It’s a really exciting line-up for me, and hopefully everyone else as well. I know it’s going to be a sick night!

So, what can fans expect from yourself at Sigalaland?

I always have my own mashups and bits that I do. I’ll be playing some fresh stuff in my set - obviously, it’s a new year, so there are loads of new songs that I want to share, new music that’s out there, that I haven’t had a chance to play yet. My sets are all about high energy, lots of big vocal tracks to get everyone singing along. It’ll be a really cool night.

Finally, you’ve collaborated with some incredible names over the course of Brighter Days. Any memorable stories from the studio or stage?

I had a great show in Malta. It was one of the first shows off the back of the album and I managed to get Fuse ODG, Paloma Faith and Ella Eyre all out there to do this show, and it was just unreal. It was the first time I’d performed with Fuse, and he has so much energy, he properly goes in. I’ll always remember that show, it’s an amazing feeling when you make music with artists that I’m really inspired by, that I really respect, and then to take those songs and perform them live with those artists really completes that journey.

I’ve got a lot of music that’s already in the bag and sounding great, and I need to find people to collaborate! I’m aiming high this year; I want to work with the global superstar level of artists.

Sigala will be joined by Blonde, Dynoro and Alle Farben on Sat 2nd Feb, get tickets & more info here. 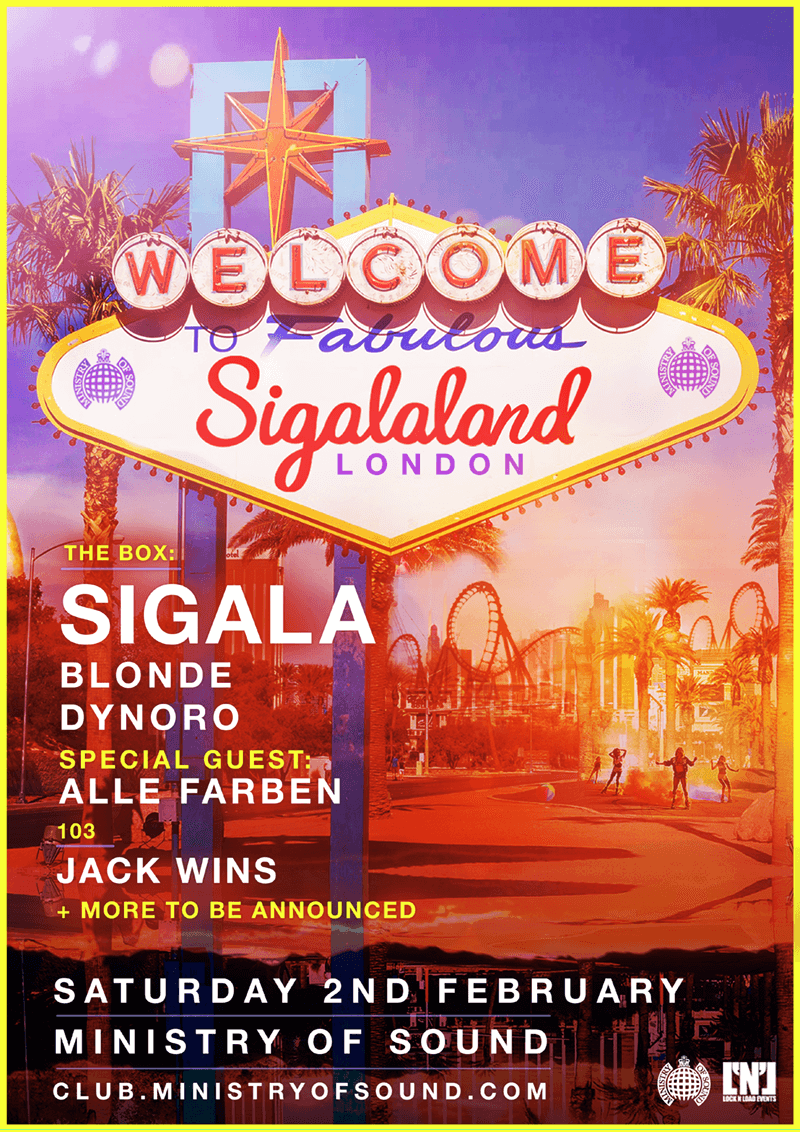