Michael Calfan is part of an exciting wave of French producer / DJs that have brought a new energy to dancefloor from Ibiza to London. Breaking onto the scene in 2011 with the Axwell-approved "Resurrection" his sound has since morphed to a bassier, funkier house vibe.

He regularly plays our People From Ibiza nights alongside fellow countrymen Kungs and Klingande. A few weeks ago he was in London and had a Thursday afternoon free. A keen skateboarder from an early age, he almost turned pro before producing became his passion. With that in mind, we suggested going skateboard shopping in Brick Lane's Slam City Skates.

MOS: We’re in a Skateboard shop because you are really into skateboarding.

When did you start?

I actually started when I was quite young, I would say maybe eight years old. Then when I was a teenager, I had the idea, the dream to go pro, but I was probably not that good.

You must’ve been pretty good for a teenager if that was even potentially on the cars.

Where did you skate?

I actually had the chance to skate near my father's home so I had to skate back with every morning, every weekend but yes that was my first passion actually before music. Then I discovered music and that became my main interest.

How do you think your life would be different if you had a professional skateboard as opposed to being a DJ? They’re pretty different worlds.

No, no it's totally different. Yes, I don't know, really at that time there were all the Tony Hawks games and I was like totally in love with all the Chad Muska videos and so I wanted to be like them. I was like 14 years old, I was totally not in a group or anything like that, but it actually gave me, I don't know I had such a lot of memories, skateboarding memories; leaving my home from 10:00 am and back home at like 8:00 pm. I’d spend all of the days skating. It gave me a feeling of freedom, which is similar to making music.

They’re both creative too.

I heard that you started producing at a young age, and you actually started with production software on your mum’s computer?

Yes, yes. I was 16 years old, 17 years old actually, ten years ago. And she had like a typical first Macbook, the first white one. I started on a Garage Band. I sampled some stuff, there were already pre-recorded loops on there, so I started messing around with that. Then after a while, I got Reason. It was super. It was nice but it was very strange because it was quite complicated, but it was a good start. Now I'm on Logic. I'm still on 9, I’m too afraid to change to 10 in case there’s too much change.

When did music really take off for you?

Around 2012, 2011. The first track, “Resurrection”, I would say 99% of this I did it in my bedroom. In my teenage room studio. At the time I was signed to Bob Sinclar’s label. So I gave it to him, I said “it sounds a bit like Axwell stuff”.  About that time was the beginning of Swedish House Mafia. I knew Bob was friends with Axwell so asked him to send it to him. Axwell totally loved it and decided to sign it. From that, I started to get gigs in Europe, not so much in the UK at that time to be honest.

I guess at that time, that sort of sound wasn’t over here just yet.

I would say two years or two and a half years later I did “Treasures Soul” and it was super big in the UK. That’s when I started to get gigs over here.

That track was what brought you over to this audience. 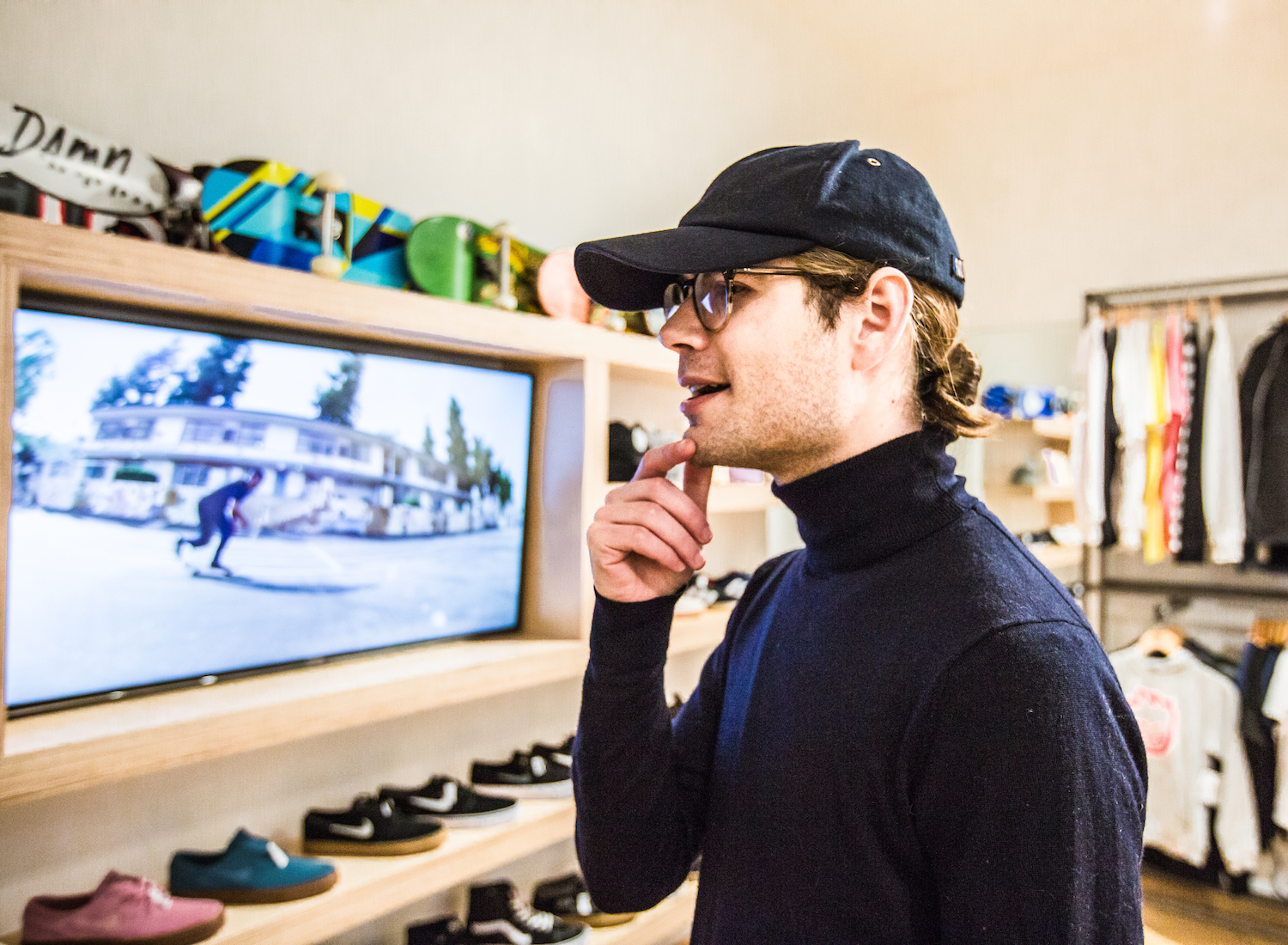 How did teenage you end up knowing Bob Sinclar?

I was like 17 years old and I was hanging out with a guy. A friend of a friend and he was like to me, “yeah, you know, one time I met Bob Sinclar”. I was like, “No” - I was sure he was lying. He said, “yeah, yeah I’m going to call him” and he called him. He said, “I know a guy, he’s doing good music, you should check him out on MySpace”. He handed me the phone and all of a sudden, I was talking to Bob. I said, “I like your stuff, maybe we should talk a bit over email”. For the rest of that year, I was sending him a track basically every week. Music, music, music. Then eventually he signed me to his label. I was there from 2008 to 2013. So we’ve worked a lot together. On my stuff, on his stuff, on stuff for the label. I was a very good experience for me.

What did you learn from him?

So much! If I didn't meet him, my life would be completely friend because he helped me a lot as a producer. He helped me find my sound and to develop it. I was not super good at mixing stuff etc. When I came I was super, super nervous. When I left it was like my graduation.

Sort of a production university.

Yeah, exactly. He taught me how to sample stuff, he gave me that French Touch feeling. He showed me how he was making music at my age – the Daft Punk. Taking a loop, sampling it, making filter disco. It was an amazing experience for me.

Most of that music came from France, as a modern French artist, do you feel any pressure? There’s been a long line of amazing French producers.

No, because, In France, all the producers of my age or younger, we know that, that time is finished. The Daft Punk, Cassius, Air, Bob Sinclar. We cannot say we are French Touch 2.0 because that would be too pretentious. In my opinion, they were geniuses, the sound was so new, the world wasn’t the same, it’s not like today.

Nowadays in France, there is a local scene, but not with that French Touch sound, it’s more deep house, funk. There is Feder, Kungs, there is kind of a new scene now in France. It’s strange because me, as an artist, as a DJ, I don’t play all that much in France. When “Treasured Soul” came out it wasn’t that big in France, so I was really surprised – in the best way – when it took off in the UK.

I do think it has a very UK sound. It sounds like it was made here.

What’s coming up next, you’ve just released a track, right?

Yeah, we just released a track called “You”. Next track will be in May/April. I’ve actually got about five tracks queued up, ready to drop. Every two years I work on a series of like four, five, six singles in the same vibe. Now with this new single, I’ve just changed the run.

I know you’ve produced tracks under a different name in the past, have you been doing that recently?

No, not this time. But yes before I have used another name to try out a different sound. I really hated how the EDM sound became at that time. The super cheesy stuff. I wanted to try and make more house and garagey stuff. The sort of music I listened to as a teenager. But it was impossible to do that bridge from what I was doing to that. So, I took another name and put some stuff on SoundCloud, just for fun. Then I thought it could be good to combine the two sounds and release it under my name. It helped me a lot, when you produce on another name and it’s not for you, you’re always better.

There are no expectations.

Exactly. With the new run of music, I don’t feel I need to do that, as I’m 28 now, I’ve a lot more experience and now I make music just for me. I’m like fuck it! There are always going to be people that don’t like your music, so you need to make it for yourself first.

We’re hanging out in a Skate Shop in London, where’s good to hang out in Paris?

Ah! Everywhere! There is a club there called Rasputin. They play only techno, but the crowd is quite fancy. It has like a Studio 54 feel.

Our time is pretty much up, but before we go - if you were going to pick one of the boards off the wall which would you go for?

Oh, as a teenager I always had Girl Boards, so I'll have to go for this one. And you?

I just can't get over this Alan Partridge one, so I'll have to go for it. 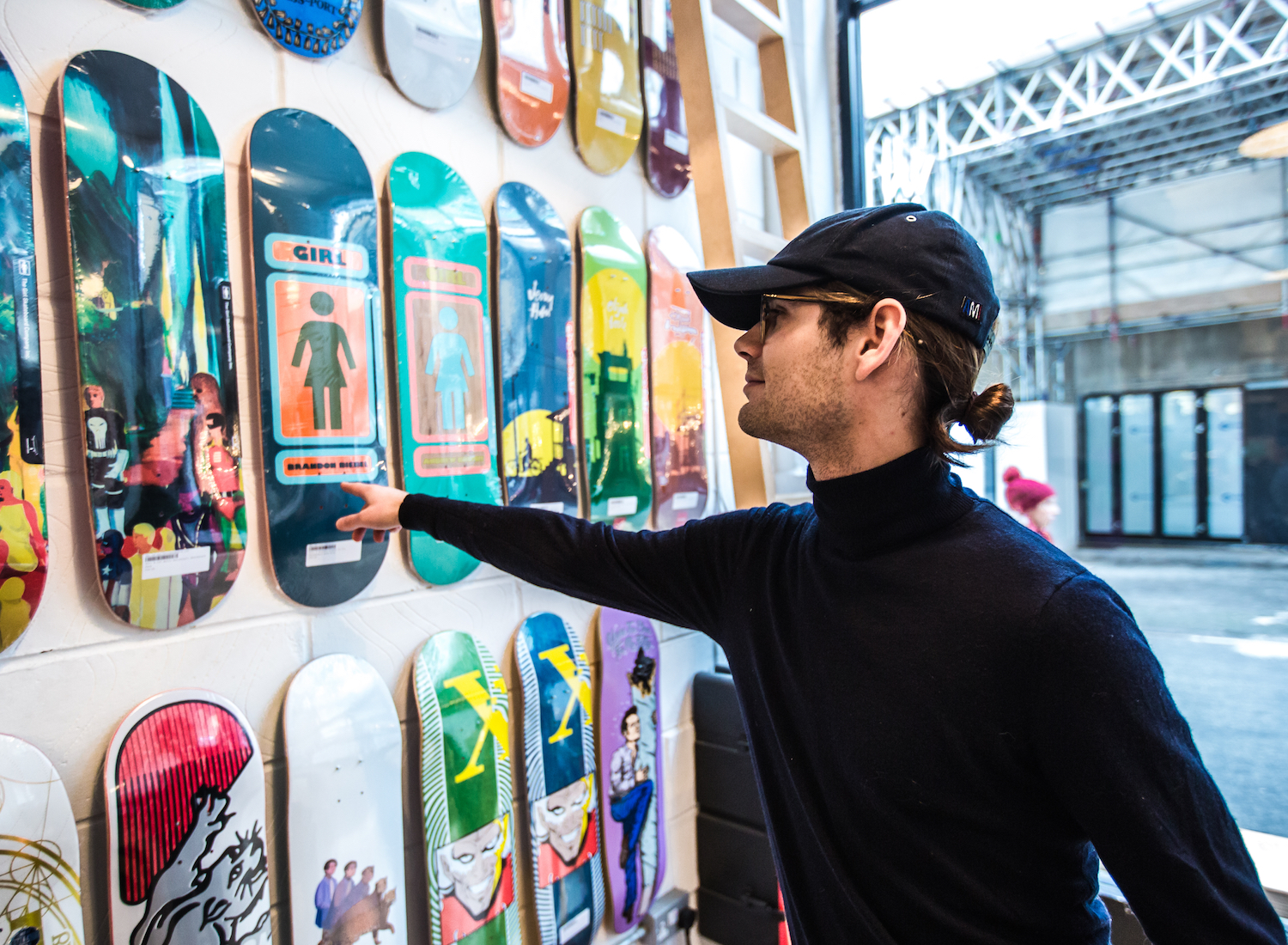 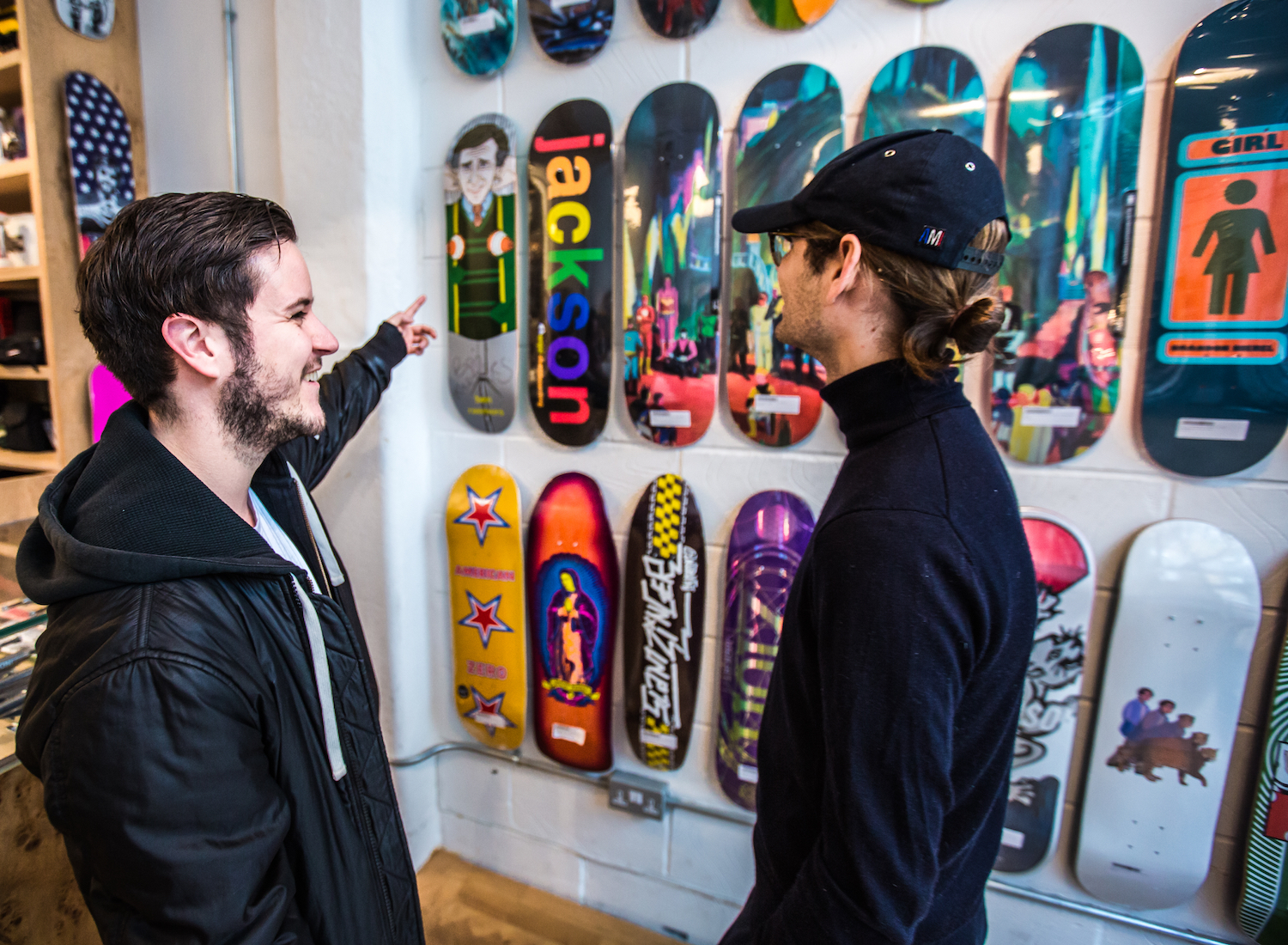 Michael Calfan - "On You" is out now, listen to it here.